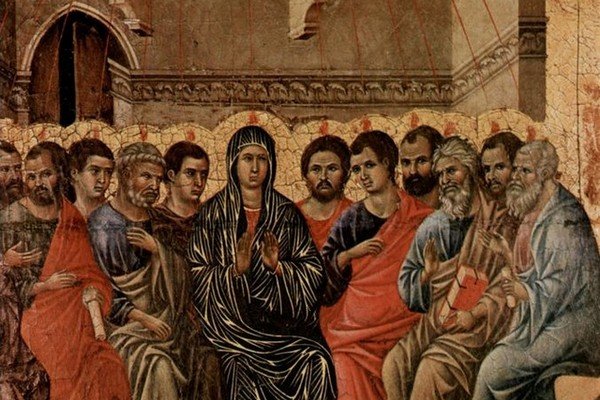 [Acts of the Apostles 2]
{2:1} And when the days of Pentecost were completed, they were all together in the same place.
{2:2} And suddenly, there came a sound from heaven, like that of a wind approaching violently, and it filled the entire house where they were sitting.
{2:3} And there appeared to them separate tongues, as if of fire, which settled upon each one of them.
{2:4} And they were all filled with the Holy Spirit. And they began to speak in various languages, just as the Holy Spirit bestowed eloquence to them.
{2:5} Now there were Jews staying in Jerusalem, pious men from every nation that is under heaven.
{2:6} And when this sound occurred, the multitude came together and was confused in mind, because each one was listening to them speaking in his own language.
{2:7} Then all were astonished, and they wondered, saying: “Behold, are not all of these who are speaking Galileans?
{2:8} And how is it that we have each heard them in our own language, into which we were born?
{2:9} Parthians and Medes and Elamites, and those who inhabit Mesopotamia, Judea and Cappadocia, Pontus and Asia,
{2:10} Phrygia and Pamphylia, Egypt and the parts of Libya which are around Cyrene, and new arrivals of the Romans,
{2:11} likewise Jews and new converts, Cretans and Arabs: we have heard them speaking in our own languages the mighty deeds of God.”
{2:12} And they were all astonished, and they wondered, saying to one another: “But what does this mean?”

How do you explain “the sound of wind approaching violently”?

What were the “tongues of fire”?

How could the apostles suddenly be understood in different languages?

Indeed, what do you think this all means?

Gospel – If your brother sins against you

Gospel – How many times shall I forgive?